“I feel amazing! I don’t even recognise myself from my before photographs!” 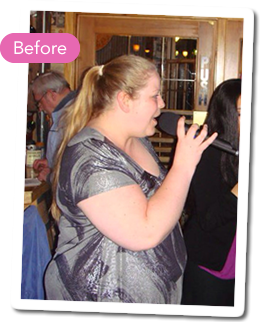 Young Christine Stokes felt that she was losing control of her life as a cycle of comfort eating and depression made her weight soar to a dangerously unhealthy 21 stone. She was in despair as her body ballooned to size 28, with 60-inch hips, 51-inch bust and a 48-inch waist.

But today, she’s more than 9 stone lighter* and a tautly toned, super-fit size 10! She’s lost 135 inches from all over her body, and her phenomenal achievement has won her the title of Rosemary Conley Online Slimmer of the Year and a prize of £1,000 in Marks & Spencer vouchers.

A delighted Christine, now 29 and studying for a physics doctorate at Manchester University, said: “I feel amazing! I don’t even recognise myself from my before photographs! I feel that now I can conquer any challenge I set my mind to.”

Christine began her amazing transformation almost by chance. “I’d been thinking I needed to do something about my weight and suddenly it just felt like the right time and the right place to start,” she said.

She’d been regularly eating her way through between 4,000 and 5,000 calories a day, mainly going for the high-fat quick fix. Christine said: “I didn’t really look after myself or make proper meals. I was sat down all the time studying and snacked continuously as I worked – pizzas, garlic bread, Pringles by the carton!”

Christine first started over-eating when she was 17, and an active size 12. She explained:“I got into a two-year relationship that turned out to be abusive. I turned to food for comfort and when the relationship ended I was up to a size 16 and diagnosed with depression.”

She decided to rebuild her life. She threw herself into her studies and she gained a first class honours degree in physics. But still her weight continued to climb and she was up to size 22/24.

Initially Christine went to a Rosemary Conley class, run by Jackie Seigenberg, and she was shocked to see that she tipped the scales at 21 stone and that her BMI (Body Mass Index) was a whopping 44.9 – well into the severely obese range. “I felt so ashamed and embarrassed, but Jackie assured me that I had taken the first important step to defeating my weight problem.”

Christine was given the two-week 1,200 calories a day quick-start eating plan to follow. That evening she cooked her first healthy low-fat meal. She lost half a stone in week one. She lost her first stone in just five weeks*.

She said: “Then I joined Rosemary Conley Online and it proved to be a really important support tool. There’s so much on the site, not just workouts and recipes, but interesting columnists to read, like Dr Hilary’s problem page. And I can log in anytime, anywhere. If I’m away at conferences, it comes with me, and I follow the exercises in my hotel room! I couldn’t have lost all my weight without the Online support. It changed my life."


I’m thrilled and proud to have been named Rosemary Conley Online Slimmer of the Year.”

After just three months Christine, who is 5ft 8ins tall, was down 3st and feeling strong and confident. She fell in love with exercise and found that it not only accelerated her weight loss and toned her body but it lifted her mood too. In consultation with her GP she was able to wean herself off the antidepressants she'd been prescribed intermittently since the bout of depression she suffered as a teenager.

And within one month she had come off them completely! At the same time she smoked her last cigarette - breaking a habit she’d had since she was 13.

In the July she decided to test her new-found fitness and, on holiday with her parents in Wales, she climbed Holyhead Mountain! She lost 7lb on that trip and hit her 5st weight-loss target*.

Christine found her next incentive in August – after she’d lost another stone and was size 16* – when her sister asked her to be her bridesmaid the following summer. They decided to buy her dress in a size 12 – unstoppable Christine was able to fit into it that Christmas!


After losing a stupendous 8st in one year*, and cutting her BMI to a healthy 25.4, she was happy just to maintain for a few months on 2,000 calories a day. She resumed her weight-loss regime a few months later and took off another 1st 1lb, making a total loss of 9st 1lb in 18 months.

Exciting news! Online slimmer Christine has become a blogger! She tells you about herself and talks about what life has been like since being told she was awarded our Online Slimmer Of The Year Award.