“I feel like I’ve turned the clock back 15 years!” 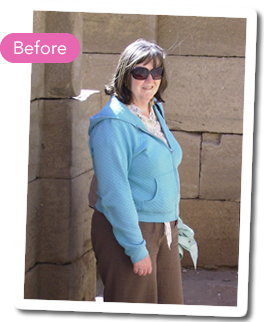 Diane Kershaw made a New Year resolution to lose weight after all her shopping trips to buy Christmas party dresses ended in frustrating failure. “They all looked great on the hangers,” she said, “but when I tried them on I thought, I don’t like the look of that fat lady in the mirror!”

In less than a year she shed 2st 7lb and cut her dress size from an 18 to a 12*. She said: “I’d been overweight for 15 years and I knew my energy levels were dropping but I didn’t want a diet as such - I wanted a new way of eating that involved proper meals that my husband could enjoy too.

“But there was no way that I would consider going to a slimming club, standing up being weighed in front of other people. I’m a private sort of person and it just wouldn’t have been me.

I realised that doing Rosemary Conley Online would be the perfect solution!” Her weight problems started when she went from being an English teacher, on her feet all day, to a headmistress stuck behind a desk. Then she became an education manager covering Somerset, and when she wasn’t in a meeting, she was in her car driving to one.

“I’d get home worn out, roaring hungry because I was grabbing snacks instead of getting regular meals and then I’d nibble all night. I didn’t have the time to go to a slimming class but I knew I needed help.”

“The greatest thing was the online food diary.”

She found the advice and inspiration she needed with the Lifestyle Change Plan on Rosemary Conley Online. Diane, 65, weighed 13st 7lb and decided initially to lose two stone. “It was brilliant because it was so flexible.

“The greatest thing was the online food diary. I filled it in every day, and I was able to reassess what I ate – and how much of it! I saw how my portion sizes had crept up, how little exercise I did, and just how frequent, and fattening, my ‘occasional’ treats had become.

“It was amazing how it puts you off eating a chocolate bar when you discover that it’s 380 calories!”

She lost her two stone in eight months but her BMI (Body Mass Index) was only just in the healthy range so she went on to lose another half stone, making a total of two-and-a-half stone in 11 months. She also lost six inches off her waist and reduced her BMI from 29.6 to a healthy 24.1*.

A delighted Diane said: “I feel like I’ve turned the clock back 15 years. I looked in the mirror the other day and thought, ‘That’s me!’ That was a great feeling.”